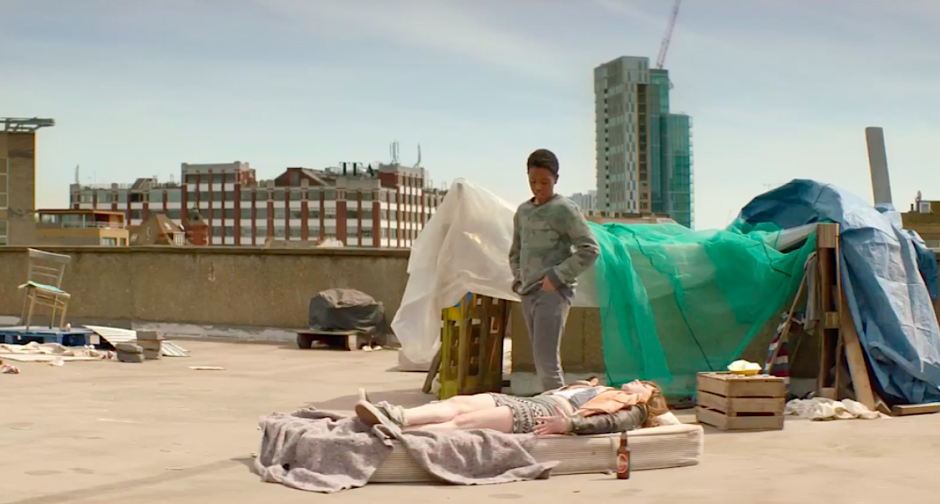 Up On The Roof

Synopsis:  Marcus is a neglected 12-year-old hiding from the world by camping out on a rooftop. His makeshift haven is threatened when the girl he’s always loved comes looking for his help.

Directro’s bio:  Nour Wazzi set up Panacea Productions in 2008 with the intention of making distinctive and compelling films with strong commercial potential.

Synopsis: Two men meet in a lonely beach. What is the reason?

Director’s bio: Born in Vladivostok in the far East of Russia, Sergey Borovkov has studied at the School of Visual Arts in Tokyo.

Analogue People in a Digital Age

Synopsis:
As the analogue age draws to a close, eight men sit in an Irish bar battling to remain relevant in the digital world; the TV in the corner a harbinger of this technological future.

Directo’s bio:
Keith was described by Felim Mc Dermott, programmer of the Galway Film Fleadh as a major new Irish talent. He has beenmaking documentaries since 2005. Keith films and edits his own work and also works as a freelance editor and cameraman.

Synopsis:  A girl is enjoying with her friends a careless summer day on the sunlit streets of Vukovar, where light-heartedness and leisure make everything seem nice and simple. They are not aware that the youthful idyll might be easily broken.

Director’s bio: Dalibor was born in Zagreb, 1975. He graduated The Academy of Dramatic Art in Zagreb, film and TV directing. He is a member of European film academy. He directed five feature films and several shorts that won 15 international and 25 national awards. His latest feature film “Kino Lika” won grand prix at European Film Festival in Lecce 2009.

It is 5 a.m. Nicki gathers together all the valuables he has at home. His wife and children are sleeping. He is leaving for Germany. He has bought a passport and will become an illegal worker. Cretu, an old childhood friend, is going with him. It will be easier traveling together, but the trip will be dangerous. “It is true that this story has to do with my past, but this wasn’t important to me. The most significant aspect was that this story allows me to say things about a serious problem in contemporary Romania” (Catalin Mitulescu).

Director’s bio
Romanian filmmaker Catalin Mitulescu spent numerous years working in Austria, Hungary, Poland and Italy. In 2001, he graduated from the Film Directing Department at the University of Film and Theatre in Bucharest. His student films Bucaresti | Wien: 8:15 and 17 minute Intarziere were selected at the Cannes Film Festival-Cinefondation in 2001 and 2002 and were distributed theatrically in Romania. They received numerous awards both in Romania and on the international circuit. His short film Trafic was awarded the Palme dOr at the Cannes Film Festival in 2004.