The 59th edition of San Francisco International Film Festival ended on the 5th of May, after two weeks of screenings, 175 films from 46 countries, events and sold out screenings.

The aim of SFIFF is to celebrate the innovative work of local and international filmmakers, to reward new and established talents and, above all, to create a community for cinema lovers.
The festival program encouraged the active participation of the audience –masterclasses, Q & A, conferences, concerts — and made interaction possible among about 350 guests filmmakers and professionals of 15 different nationalities.
Audiences, volunteers, organizers, guests and press adhered to the spirit of the festival – rooms were crowded and theaters fully booked, filmmakers were enthusiastic about the huge screens, the large audience and the free bar in the filmmakers’ lounge.

San Francisco International Film Festival, the longest-running film festival in America, offered a careful selection of new and alternative voices and an experimental programming, with dedicated categories and partnerships.
The Shorts program is meticulously curated, including 74 films in 7 sections.
Short narrative and Short documentaries, Animated short films, a space for teenagers directors (Youth), a Family section , New Visions (curated by Chi-hui Yang) and Between Us, selection of sperimental shorts (out of competition, curated by Kathy Geritz and Vanessa O ‘Neill).

GOOGLE BREAKTHROUGH IN TECHNOLOGY AWARD
“Google presents the Breakthrough in Technology Award for the best use or display of technology and innovation”
Winner: From My Head to Hers, Maria Alvarez (USA), crowdfunded via IndieGogo
• $500 cash prize donated by Google Inc.

Directors, producers and programmers of the Short sections wandered around the theaters of Mission district, the new festival location. Among other guests, there was Peter Lord, co-founder of Aardman Studio (Creature Comforts, Shaun the Sheep, Wallace and Gromit) and Morph, who landed in San Francisco to collect their prize, the Golden Gate Persistence of Vision Award. 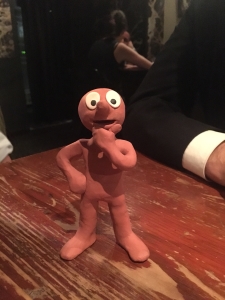 In addition, as every year, the San Francisco Film Society supports or makes entirely possible the work of many artists through fellowships, awards and residecies.
For info: http://www.sffs.org/filmmaker360