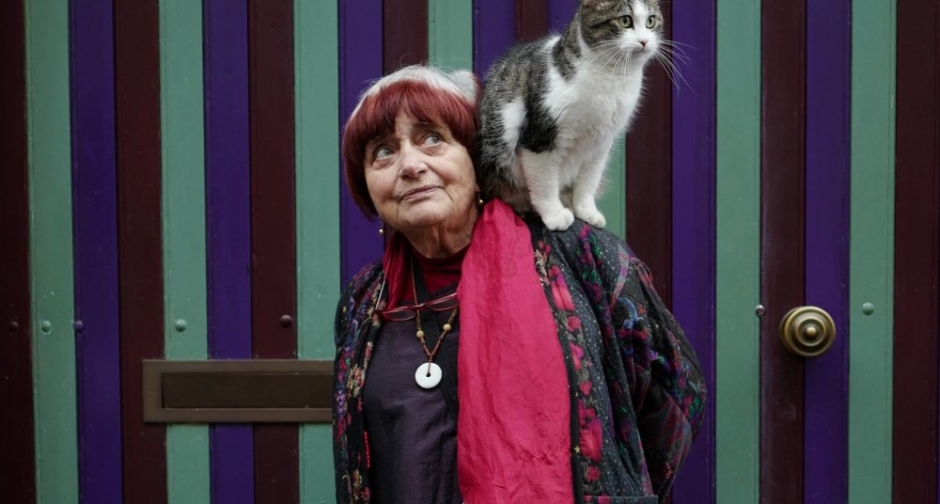 Probably one of the most remarkable traits of Agnès Varda’s filmography is that she never cared too much for the format of her films. She really wasn’t big on conventions. She once said: “Not even the least important of the painters or the writers have someone imposing to them the measure of their canvas, nor the format of their books.” She made a very spontaneous use of short films, “just like a writer, who sometimes writes a novel and sometimes writes a short story, and some other times prefers the essay, or the newspaper article.” Hence, her extraordinary filmography contains films of all lengths and genres – essays, dramas, musicals, documentaries big and small – and her short films are just as poetic, rich, and compelling as her feature films are.

Even her best known feature film, Cléo from 5 to 7 (1962), contains a film within the film, a very short silent film with the participation of Jean-Luc Godard and Anna Karina (known as Les fiancés du pont Mac Donald). 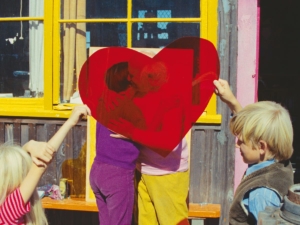 Uncle Yanco (1967) is a great example of her documentary style. In the film, Varda meets her American uncle Yanco, a Greek immigrant, bon vivant, painter of celestial cities. Yanco is a quirky character who lives in the “aquatic suburbia” of Sausalito, a floating village in the San Francisco Bay Area. The scene of their “first” meeting is played and then re-played, re-staged, from different angles, in different languages, making us very aware of its construction – it’s typical of Varda’s cinema to playfully mix the boundaries between documentary and staging.

Yanco’s tone when he speaks to the camera, so genuine and lyrical, recalls so much that of Varda herself. This 19-minute film is Varda’s exploration of her roots as well as a great little portrait of America in those years of cultural revolution and social transformation – as all of her American films are, from Mur Murs to her short doc Black Panthers (1968).

And so is also Salut, les Cubains (1963), a photographic testimony of Cuba, its people and its music, in the time of Fidel Castro. Putting the audience under a sort of spell, the amazing pacing of this film makes its viewers forget that what they are watching is in fact a montage of black-and-white stills, as the energy that emerges from the ensemble makes it feel more like a documentary in technicolor.

Her entertaining, Varda-esque, trademark documentary style can be found already fully developed within some of her first shorts, the amusing “tourist shorts” that had been commissioned to her by the French Tourism Office, to film the crowded French Riviera (Du côte de la côte, 1958), and the castles in the Loire region (Ô saisons, ô chateau, 1958), where Varda’s curiosity often causes the camera and the narration to wander off its main subject to catch other details in the surroundings – such as the groundskeepers working in the gardens of the property. 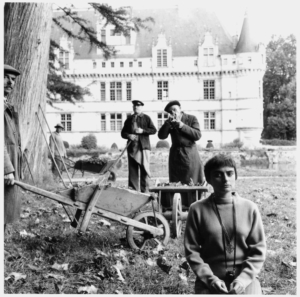 Varda’s way of making cinema was very playful, inventive and always concerned with language, starting by her films’ titles – she loved neologisms (Daguerrèotypes) as much as puns and alliterations – think of Mur Murs, Visages Villages, glaneurs/glaneuse, Le Dites Cariatides. The latter (1984) is a delightful, hidden gem – from the playful alliteration of its title (in English “the so-called Caryatids”), to the shots of the beautiful female statues and Atlases supporting Parisian buildings, accompanied by extracts from Baudelaire’s poems, read by Varda herself. 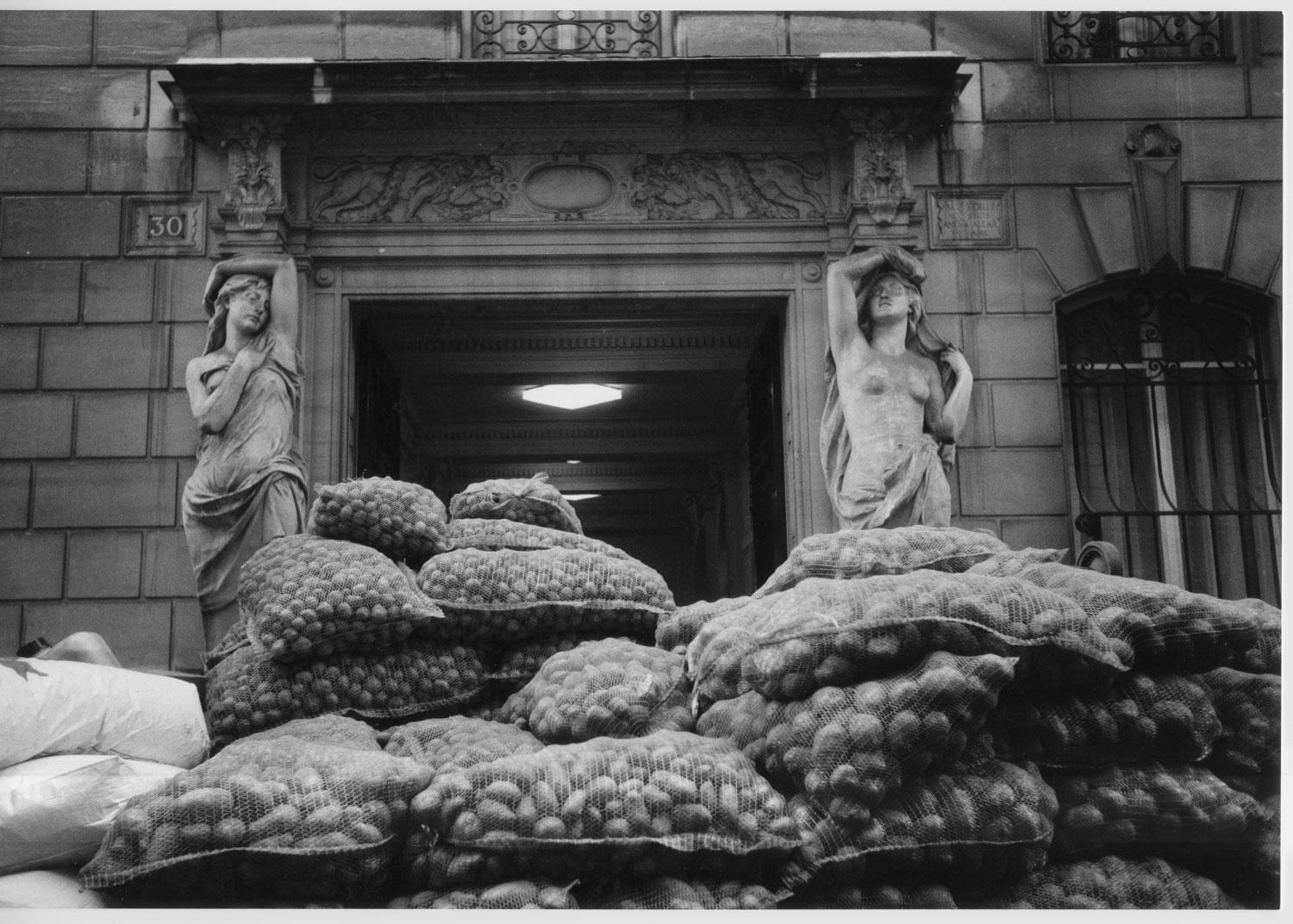 In the same way Plaisirs d’amour en Iran (another film in a film, part of her pro-abortion musical L’une Chante, l’autre Pas, 1977) sublimely blends poetry and architecture in its short narration. Poetry and architecture also meet in the aforementioned Ô saisons, ô chateau (the title is borrowed from a poem by Arthur Rimbaud).

Poetry, art, memory, memories, photography, women, cats, the interest in ordinary people. Varda’s whole filmography, short films as much as features, spans across decades but all seems to juxtapose, to be made of recurring themes and elements that she explores and revisits from time to time. Ulysse (1982) is a short documentary built around a photograph Varda had taken years back on a beach in Calais. The photograph shows a naked man and a young boy on a stony beach, the child looking at a dead goat on the bottom right corner of the image. Varda sets to find out what happened to the men portrayed in the photograph, but, to her disappointment, both the man and Ulysse, the child , barely have any memory of that day: “To each his own story” says Ulysse, now a man in his thirties. In 2015 the same photograph resurfaces in Visages, Villages. Likewise one of her very first shorts, L’Opéra-Mouffe, shot in her neighbourhood while she was pregnant seems to be a precursor, or a companion, to her feature documentary Daguerrèotypes, in its intent to portrait the people of the rue Mouffetard.

Varda kept on using the short format regularly throughout her career, up until a few years ago. Unfortunately, all her shorts are not easily accessible: they are not often screened or streamed (exception made for Mubi), and therefore remain lesser known; yet these are a fundamental part of her legacy, like pieces of a mosaic in an immense body of work that is inspiring, original and life-affirming as few others. There is no doubt that cinema was lucky to meet this artist, who was source of uncontainable energy and endless creativity.