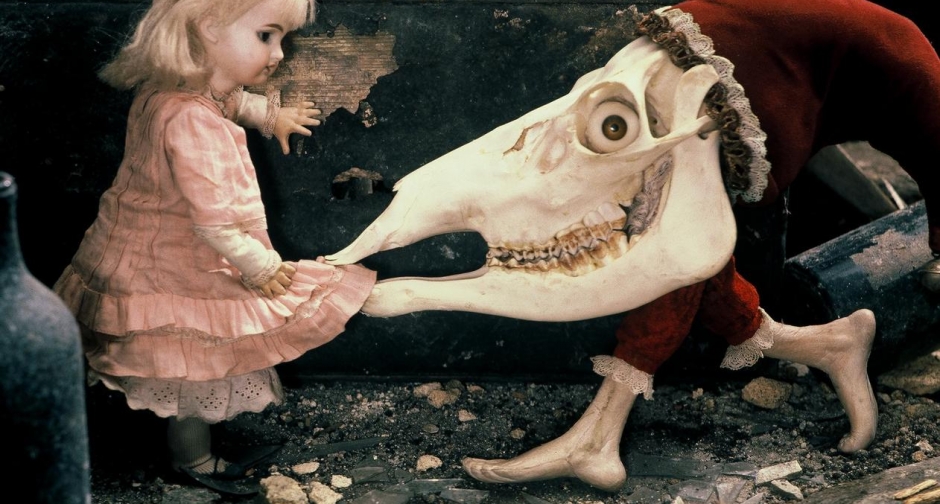 When The Guardian asked Terry Gilliam to pick his ten favorite animated films, the director included Dimensions of Dialogue, a 1982 short by Jan Švankmajer. According to Gilliam, the Czech director’s stop-motion animations are characterized by a disturbing, nightmarish atmosphere that springs from a particular use of everyday and common objects in unexpected ways.
This dreamlike, surreal, almost hallucinatory dimension is the cornerstone of Švankmajer’s work, and has always been, from the very beginning – in fact, in the ’60s, the artist took part in the Czechoslovakian Surrealist Group. His films are full of cultural and scientific allusions, but there is something deeply primal that makes them accessible non only to the intellectual crowd, but to everyone: the director’s vibrant and multi-faceted imagery seems to speak directly to the viewer’s subconscious. Many of his films, such as Down to the Cellar, are shot from a children’s point of view, making the sudden and frightening explosions of violence more confusing for the viewer.

Considered one of the greatest animators of all time, and cited as an inspiration by directors like Gilliam, Tim Burton and the Brothers Quay, Švankmajer uses a wide range of techniques: puppets, stop-motion, timelapse, clay-mation, 2D animation, pixilation. Sound-design is another key element of his style, as the sounds are always exaggerated, distorted. His main themes are varied and diverse: the food is a preferred subject and medium in many films, but we can also find fairy tales adaptations (Alice in Wonderland), Edgar Allan Poe and other poets’ works, films about football, homages to figurative artists from various historical periods and much more. In addition, almost all of his works are permeated with a bitter irony, which often leads to outright black-comedy tones, almost nonsensical, as in Meat Love:

An exemplary compendium of many of Švankmajer’s recurring styles is the aforementioned Dimensions of Dialogue, a 14-minute short that won the Golden Bear at the Berlin International Film Festival in 1982. Divided in three parts, it can be considered as a decidedly pessimistic study on different types of human interaction we face everyday, and how the outcomes of these exchanges can be disastrous.

In Eternal Conversation Arcimboldo-like heads fight with each other, eventually falling into literal pieces; Passionate Discourse shows us a clay man and woman who kiss, melting into one another, only to end up fighting and destroying each other, while in Exhaustive Discussion two clay heads have a fight intertwining various objects with their tongues. The movie is both disturbing, horrific and funny, and leads a profound reflection on human relations .

Jabberwocky, 1971, loosely based on Lewis Carroll’s poem of the same name, is a fresco in motion, hallucinatory and obsessive, in which we follow (on several occasions, scattered between disturbing images of destroyed dolls and puzzles that form and break all the time) the struggle of a blob of ink that can’t escape from a maze. When it’ll finally be able to find the way out, freed from the constraints of material life, it’ll run away from the window, but not before disfiguring a menacing portrait of an elderly man, clearly a symbol of oppressive authority.

Always a controversial artist, in the 70’s the director suffered the censorship of the Communist regime that prevented him from making films for many years. The ban arose from a review that complained the lack of socialist themes in Leonardo’s Diary, a short he presented in Cannes in 1974. The experimental short combines long animated sequences in which the director brings Leonardo Da Vinci’s sketches to life and various archival images from war scenarios to actions totally daily.

Švankmajer continues to make films, and although his recent work has been mostly live-action, some stop-motion scenes are always present. Milano Film Festival is featuring a retrospective of his career to celebrate his 80th birthday, and in 2015 he wrapped production of his new film Insects, based on the brothers Čapek’s drama.