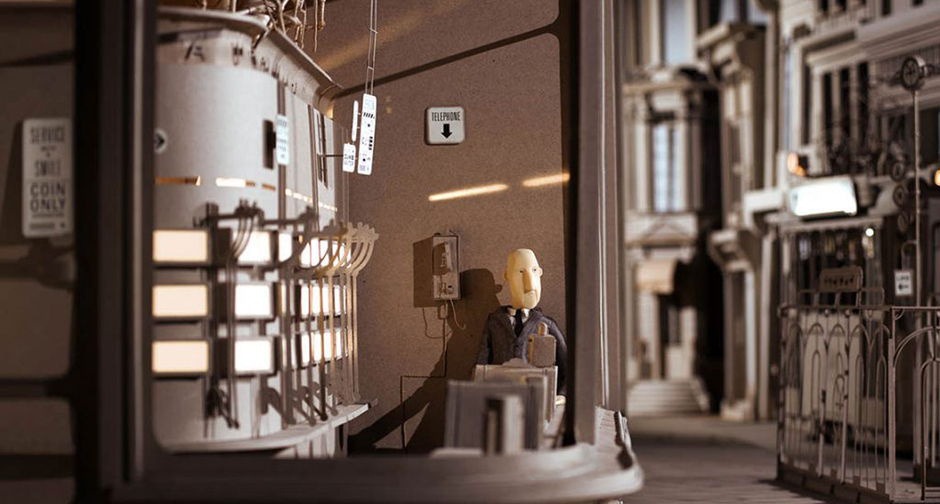 The Academy of Motion Picture Arts and Sciences said that 10 films have advanced in voting in the Animated Short Film category of the 90th Oscars. Sixty-three films had originally qualified in the category. The Short Films and Feature Animation branch members will select five nominees ahead of the nominations to be unveiled January 23, 2018. The Oscars are March 4.

Pixar’s Piper, directed by Alan Barillaro and theatrically released alongside Finding Dory, won last year among the 10 animated shorts that made the Oscars 2017 shortlist. What is new this year is that five of these titles are available online.

Cradle by Devon Manney
Returning to the USA after losing both arms overseas, a young veteran battles phantom pains, prosthetics, and memories of his pre-war life while reaching for a sense of normalcy. Produced by University of Southern California, Cradle won the Silver Medal at the Student Academy Awards. Manney hand drew everything frame by frame in TVPaint. He’s currently developing a feature-length film set in his home state of Minnesota.

Dear Basketball by Glen Keane
Kobe Bryant’s inspiring poem Dear Basketball is drawn to life by Academy-Award winning Disney animator Glen Keane and set to the music of legendary composer John Williams. Premiered at Tribeca Film Festival, the hand-drawn film speaks directly to the game, and conveys Kobe’s gratitude, love, and passion for the sport before leaving it behind.

Fox and the Whale by Robin Joseph
Robin Joseph is a Toronto-based freelance animator who has worked on mainstream projects at Blue Sky, Dreamworks and Illumination. He embarked on the risky path of refusing outside work to complete in 16 months this film, using Photoshop. His partner Kim Leow chipped in with 3-4 months of work doing all the CG in the short. The result is the lyrical tale of a curious fox trying to find an elusive whale that he hears from ashore.

In a Heartbeat by Esteban Bravo & Beth David
A closeted boy runs the risk of being outed by his own heart after it pops out of his chest to chase down the boy of his dreams. Produced with a successful Kickstarter campaign, this four-minute film, with 12m views in under a week, is a boy-meets-boy story turning into a gay romance. Bravo and David are both computer animation majors at Ringling College of Art and Design in Florida. Bravo is now an animation intern at Blue Sky Studios, the company behind the Ice Age franchise.

Life Smartphone by Chenglin Xie
Staring at their smartphones all the time, people are alienating themselves from the real world. Premiered at Annecy 2017, a depiction of this social situation inviting people to be introspective. This is the ironic and smooth 2D graduation film directed by Chinese animator Chenglin Xie as student of the China Central Academy of Fine Arts.

Lost Property Office by Daniel Agdag
Ed is the sole custodian of a lost property office. He is like the lost items gathering dust. But although he is content to remain this way a letter on his desk states otherwise. How he chooses to move on from his post is somewhat unorthodox. This meticulously hand–crafted short film is directed by Australian artist and filmmaker Daniel Agdag. The art deco, post–industrial inspired world was realised over a preproduction period of 18 months. The entire film was fashioned from over 2,500 sheets of recycled cardboard, patiently hand-cut using 1,287 scalpel blades to create 1258 elaborate set pieces and delicate individual props. The natural sepia tones of the cardboard were carefully lit and photographed 24 times for every second of the 13,680 final frames.

Lou by Dave Mullins
When a toy stealing bully named J.J. ruins recess for a playground full of kids, only one thing stands in his way: the “Lost and Found” box. The Pixar short which preceded Cars 3 in theaters. Dave Mullins is a first time director but has been working with Disney since 1995 and Pixar since 2000, working in the animation department for the likes of Up, Monsters Inc., Ratatouille and Inside Out. This is almost a silent film, but with a strong message.

Negative Space by Max Porter & Ru Kuwahata
This stop-motion animated short screened in more than 80 festivals and won 25 prizes since its premiere at Annecy. Negative Space is an adaptation of the poem by Ron Koertge about a boy who connects with his constantly traveling father by learning to pack a suitcase. Combining hand-made, highly-textured puppets, props and sets with a touching and comedic tone, Porter and Kuwahata, who are currently based in Baltimore, made the project in France. Since 2008, they have been working together as Tiny Inventions.

Revolting Rhymes by Jakob Schuh & Jan Lachauer
Produced by Magic Light Pictures for BBC One, the first of two animations based on the much-loved rhymes written by Roald Dahl and illustrated by Quentin Blake. Snow White and Red Riding Hood become lifelong friends as Snow White takes on the might of the wicked Queen, while Red is called home to deal with a pair of hungry wolves – one who has eaten her grandma and then dressed in her clothes, and another who can’t stop himself from eating some unsuspecting pigs. Featuring the voices, among others, of Tamsin Greig and Dominic West.