Growing Girl is a short film by Marnie Ellen Hertzler, American video-artist and filmmaker based in Baltimore. The short, which features a score by indie musician and composer Dan Deacon, has been played at a number of film festivals in the States, while Hertzler’s latest short film Hi I Need to Be Loved has recently premiered at the 2018 Locarno Film Festival.

The short starts off as a PowerPoint presentation divided into sections, each dedicated to a different type of snake and its peculiarities.The way the short itself is narrated by Hertzler recalls a presentation: in fact the work has also been shown by the artist as a live performance – an actual PowerPoint presented to the audience with live dialogue and sound effects.

While we are shown a video of captive snakes taken out of their cages, passed from hand to hand and held by amused strangers, the narrator is reminded of all the times she has been disrespected or made feel uncomfortable, either in private or in a public space such as the office – here symbolically portrayed by stock images of men sitting on swivel chairs, women standing by office cabinets, rubbish bins. The thought of all the times she has been verbally or physically abused makes her regret to not have reported the episodes that made her feel uneasy. 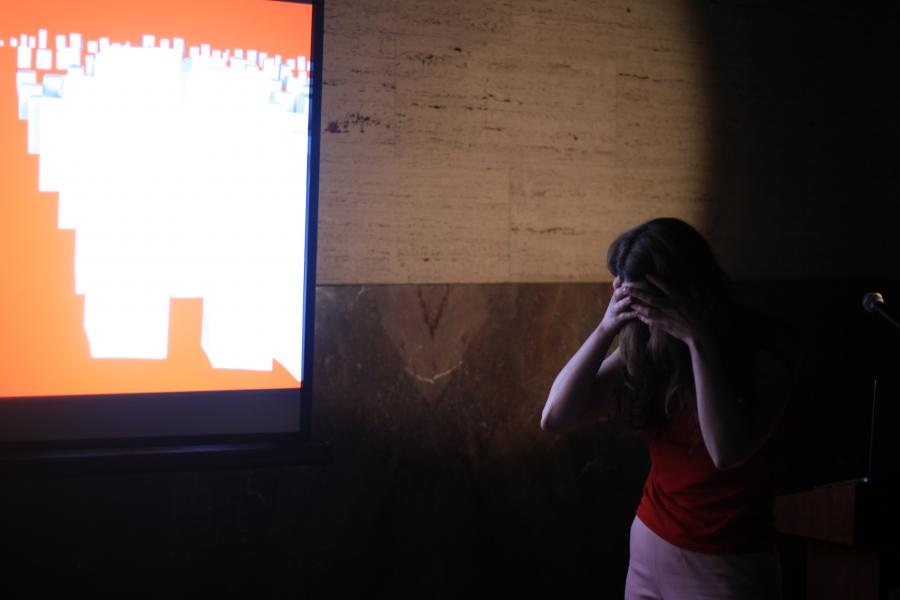 The feeling of anger and frustration that Hertzler talks about is experienced by most women in their lifetime and, although the issue has been increasingly addressed and denounced in recent years thanks to the growth of the #MeToo movement, it is still hard for many to speak out about abuse. The representation of the sterile office environment through the use of dozens of similar, interchangeable stock images seems to amplify the ordinary nature that the issue has assumed in the workplace – as if abuse could be found in an office setting just as easily as any piece of furniture.

Growing Girl also looks at the expected behaviours, postures, smiles that women are supposed to abide by in the workplace; it is a sharp reflection on public and private space (where does one end and where does the other begin?) in which uninvited invasions and unwanted interruptions often take place – as the narrator suggests at one point: “There is no personal space. I sit and await to be interrupted”.

In a cathartic finale, Hertzler’s rage and regrets are beautifully sublimed in her fantasy of revenge, achieved through her transformation into a captive, ever-growing snake which grows larger and stronger than her attackers to overcome them and, for once, turn the tables.