The Arab Series #2: The Curse

Fatine has ventured far from the village to meet her older lover. When she is caught by a group of children, all she wants to do is go home. 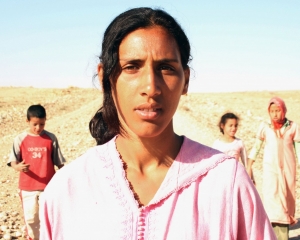 Fatine is a young Moroccan girl, she’s all pride and willpower. The sun beats down in the desert: she has ventured far from the village to meet her lover, a man old enough to be her dad. He promises Europe, a family, a home, an ordinary life. A dream. But the couple is soon caught by a group of children. If Fatine doesn’t pay to keep their mouths shut, they’ll say to her parents and to the whole town that she’s a slut. There’s only dust around and now there’s nothing to hide. Fatine starts walking – all she wants to do is go home.

Produced by Gavin Humphries (Quark Films) and Karim Debbagh (Kasbah Films), supported by Film4 and BFI, The Curse is the fourth short film written and directed by Fyzal Boulifa, British filmmaker of Moroccan descent born in 1985 in Leicester. Based on an anecdote his mother told him about her youth before she emigrated Morocco, the story of Fatine (an intense and androgynous Ibtissam Azara) is an explosion of humanity and rebellion. She’s an outsider who wants to leave the shithole where she lives, disclosing her sexuality — its power, its condemn — and becoming a victim, without ever complaining and feeling as a victim (the curse is Brit slang for menstruation, the Arabic equivalent Al-Laana suggests the misery of the individual before All). The camera tails legs and feet and follows the children procession. The kids blackmail and attack as they’re pathetically human and reproduce the social entrapment.

Taina Galis’ photography and Annette Remler’s handheld moving shots capture the magic of Chichaoua (a little nowhere town on the highway between Marrekech and Essauoira) and transform this backdrop into an abstract, infinite and unreal non-place. Fatine reacts to the instant-karma that punishes her, going beyond fatalism and misery. A ruthless concreteness that makes it possible to escape an already dictated fate. Playing with realism (shooting in real locations and using non-actor natives) and genre (the storytelling feels as a menacing fairytale burnt by the sun), The Curse is the expression of its helmer’s multiple identity – in the vein of Nabil Ayouch and Rabah Ameur-Zaïmeche, the director reconciles himself with his roots finding past, present and (lack of?) future in the story of an everyday rebellion.

Fyzal Boulifa directed his first short in 2008, Afternoon. Whore (2009) and Burn My Body (2010) were supported by B3 and the UK Film Council. The Curse was selected in 2012 at Cannes Directors’ Fortnight, BFI, Sundance and Dubai Film Festival. In 2015 he wrote and directed Rate Me, portrait of a teenage escort which premiered at Directors’ Fortnight. He’s currently developing his first feature film, Pagan Magic, dark fable set in 60’s Morocco and inspired by Japanese ghost stories (!). The project has been selected to Open Doors 2015, Locarno Film Festival’s co-production Lab, which focuses on different countries from the South and the East every year (this year Open Doors concentrate on production in four countries from the Maghreb: Algeria, Libya, Morocco, Tunisia).

When breasts are not the massive dream for a teenage boy.

A shortdoc about paid sex that will probaly trigger a very long discussion.